I found it funny how everyone wanted to comfort me because it rained thinking I would be upset – but I know only those who are truly blessed have it rain on their wedding day. I imagined the rain drops were tears of happiness from Heaven from our relatives who passed away and were with us in spirit.” – Daynese

Waking up to rain on your wedding day is many a brides deepest fear. Daynese has to have one of the most beautiful takes on the significance of wedding day rain we have ever heard. Despite not a drop of rain falling from ceremony to reception, the Now Jade team were quick to put a ‘just in case’ plan B into operation. When they moved the ceremony indoors Daynese told us she found the backup location even more beautiful than the one she originally chosen and moving inside gave their ceremony a more intimate feel.

“Our vows had everyone in tears because they said there is nothing more beautiful than two people who love each other speaking from the heart. I was so busy with planning that I didn’t write anything down so I had to wing it… I spoke to Chris as if we were the only two people in the room.” – Daynese

As if heartfelt vows were not enough Daynese and Chris included many thoughtful gestures to be sure that all their family and friends were an important pat of their wedding day, notably the “ring warming” ceremony. They even found a cool way to include Chris Jr, Chris’s son who was unable to attend, including him on their cake topper. Daynese told us “when he looks back at pictures he knows that our family wouldn’t be complete without him.”

“The ring warming ceremony was the most important part of the ceremony, even more so than the vows we spoke to one another. I wanted everyone at our wedding to feel like they were not only witnessing something special but they were a part of it. Our rings are a symbol that we will be blessed by the love of our friends and family always.” – Daynese

A final special mention goes to Andres, who serenaded Daynese and Chris on the piano during their portrait session, Sara Tamargo for all the compliments Daynese and her family had for their makeup and Disco Movil for the music, as Daynese said: “You know it’s serious when the bride dances barefoot.” 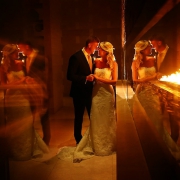 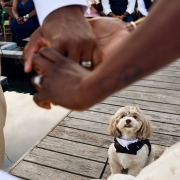 Cancun Wedding – Nizuc – Tatiana and Wayne plus Gizmo the dog! 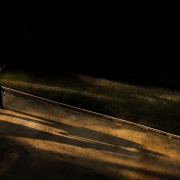