“In Mexico, you don’t need to have a ton of flowers or a beautiful botanical garden… Everywhere is beautiful! What better back drop than the Caribbean ocean for the best day of our lives?” #travelforlove

“Neither of us are religious, and we felt like there wasn’t any place special enough to us in St. Louis to hold our wedding. Honestly all of the places here were going to be outrageously expensive to have the wedding that I knew I’d want.”

“My “bridesman” is proudly serving our country in eastern Europe with the Marine Corps, and he flew all the way from Germany on Thursday to spend the weekend with us. Others came from Las Vegas, Chicago, Texas, Kansas, leaving behind spouses, pets, children and work….”

“It was pretty amazing to know so many people wanted to travel all that way for Josh and I.”

“we did a “first touch”, which was my groom’s idea! I would have been perfectly happy doing an actual first look. I think he saw some cute photos on Pinterest of couples having a “first touch” rather than a “first look” and he wanted to make that part of our wedding traditional, since we skipped a lot of the expected stuff.”

“We kicked around the idea of writing our own vows, but when we read what the “standard” vows are… we were happily surprised with how fitting they were. The “hands” ceremony was particularly touching, as I think I gripped and re-gripped Josh’s hands 13849 times during our ceremony.”

“I really loved the toast by my matrons of honor. They hit the nail on the head when they said that I love music, and that the majority of my memories are tied in some way to a particular song or lyric.”

“I don’t think we left the dance floor once we got on it! We were trying to solicit other dancers to come join us, but seemed to fail miserably :(. I had been legitimately scared that my dress wouldn’t zip. I didn’t have the chance to try it on right before leaving the States. I also neglected to factor in what effect a week in Mexico eating and drinking all of the deliciousness with minimal CrossFit time, would have on my body.

“Once that thing zipped up, it was go time as far as I was concerned!”

“We traveled to St. Cloud Minnesota the day after we returned home to participate in a 3 day CrossFit competition, so we didn’t slack too much after the wedding was over, but we definitely let loose that night!

“Our experience with Valeria and Polly was fantastic. Everyone joked about how Polly in particular was like a ninja with her flash. If anyone burned more calories on the dance floor than we did, it was those 2. They never stopped moving. They never seemed to miss anything…. even the things we probably wish they’d have missed. Like the bustling drama of my bridesmaids and mother not being able to find the loops from the seamstress :)”

“We chose The Royal because we read almost exclusively good reviews. A college friend of mine had gotten married there before, and I really liked his pictures. We wanted a location that was close enough to the airport, with a family friendly option near by in the Gran Porto.”

“I really liked the option to be close to the water, without having to drag a wedding dress through the sand all night long. We wanted to maintain a bit of formality and keep things slightly traditional in the sense of attire, so the gazebo and open patio was the best fit.”

“I’m a firm believer that any combination of the beach, the sun and all inclusive can’t inherently be all that bad. I also knew I wanted to get married AT the beach, just not ON the beach.”

Thanks to Ashley and Josh for being a SUPER fun couple – it was a pleasure to be  part of you day!! Don’t miss Ashley and Josh’s super sexy trash the dress too!

My dress was from RL Bridal and Prom in Oklahoma City. It was a David Tutera “Kerri”. I had it specially altered by Nancy and the fine ladies of Phydella’s Alterations in St. Louis. The bridesmaid dresses were from the Vera Wang White collection, as was Josh’s tux and the groomsmen attire. Nancy also handmade my veil, which was the first and only veil I wore with that dress. Our rings are from Genovese Jewelers in St. Louis, and The Royal provided all of the flowers, food, and decorations.

Special shout of to Kelly Morman of Totally Trips. She was our travel agent, wedding coordinator, and general go-to girl for all our wedding AND travel needs. 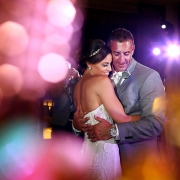 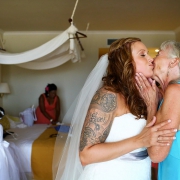 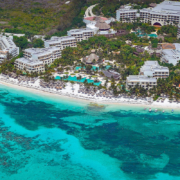 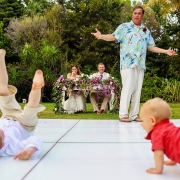 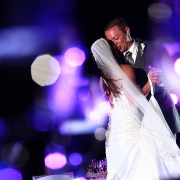 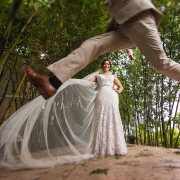