When Andaz opened  in 2017, they wanted help from artistic professionals and reached out to Del Sol Photography.  In 2017 and 2018, we were cultural insiders for Andaz Mayakoba. We were in charge of curating boutique photo experiences for some visitors to the resort.  Since the Andaz philosophy was all about expressing your own personal style we had to include an experience paying tribute to the artist Frida Khalo. We are excited to create “Frida’s wardrobe” concept.

Today (and with no connection to Andaz whatsoever)  Frida’s wardrobe is a space where Sol Tamargo can work with clients to experiment with Mexican inspired clothes and adapt them to their unique style.

Frida Khalo is an icon of unique personal style and Mexico – she IS Andaz!!

Part of the power of Khalo’s appearance was her subversive use of traditional clothes. She was wearing Mexican traditional clothing when and where no one else was! When she was walking around in San Francisco in the ’30s, kids used to ask her, “Hey, where’s the circus?” She was also mixing European and Mexican clothing. We’re exited to see how Andaz Mayakoba guests integrate the Mexican elements into their own personal style!

Frida’s Wardrobe is a playful tribute to Frida Khalo. It’s dressing-up fun, but it also gives Andaz Guests a window into Frida’s world. Khalo used her personal style as a way to express her creative heart and unlimited imagination, even when her body limited her.

For example, the corset in an intrinsic part of Frida Khalo’s style. Khalo had to wear medical corsets but she customized them. She painting and decorating them, using them to express her vision and style. We are delighted to be working with Mexican designer Claudia Bo. Claudia designs contemporary corsets embellished with traditional Mexican embroidery and headpieces inspired by the Tehuana style headpieces worn by Khalo.

One of our favorite subjects for Frida’s Wardrobe was our friend, Suze from “Luxury Columnist“.  Originally from the UK, Suze travels the world as a luxury ambassador and has experienced just about all the world has to offer.  It was a pleasure to see her be inspired by Frida, the cultural icon of Mexico.

We were delighted to offer the Frida’s wardrobe experience to Diana Villalobos Barrera and her boyfriend Hugo. It was amazing to see Diana in Frida’s Wardrobe as she’s a trailblazing Mexican female artist in her own right. Diana left Mexico to study and live in Shangai, China. She won the 2016 International Designer of the Year Award and was invited to show at Paris Haute Couture Fashion Week. That’s a HUGE accomplishment in the fashion world.

Diana blended Frida’s Wardrobe with her personal style. Finishing touches came from hair and makeup magic from Sara and Ester Tamargo. We took Diana and Hugo on a tour around Andaz Mayakoba, exploring the resort’s own Mexican fusion style.

We took Diana and Hugo to Olla Taco Restaurant where chef Jorge showed them how he prepares unique cervice inspired by traditional Yucateca dishes. We tried Axiote (a red sweet and sour sauce made from seeds) and Relleno Negro (a dark, very spicy sauce), both typical dishes from the Yucatan. The Olla Taco restaurant has incredible sunset light and gave us the chance to make spectacular golden flare-y portraits of Diana and Hugo.

The hours around sunset are magical, after the golden light comes the blue. All the illumination of the architecture beginning to have a presence. Light is soft and color changes to a moody, cozy ambiance.

We were drawn to the Cocina Milagro restaurant, not only does it look amazing for pictures but it has amazing cocktails! Who said a portrait session had to be all hard work and no fun ;) The mixologist showed us his cocktail recipes that use local, organic ingredients and we took advantage of the gorgeous setting for more pictures.

We’re looking forward to meeting our next travelers to share good times and deliver amazing images! 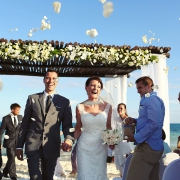 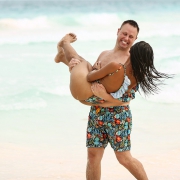 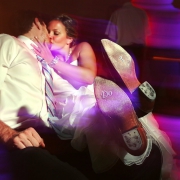 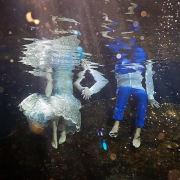 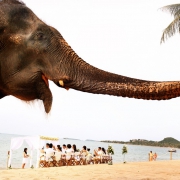 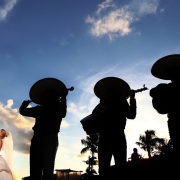