“Coming from a Mexican family our traditions and culture are held really close to our heart. Due to this the best way I could describe going to Mexico was that it was like going back home to the familiar sounds, food, and people. Now returning to Cancun and the Yucatan peninsula was very special to me as I have always had a special connection to this place due to its history and nature. This is exactly why when I was thinking of where I wanted to propose to my girlfriend Monika. It seemed like the obvious choice.” – Demetrio

For information about planning your travel and room blocks – contact us!

Del Sol Photography’s sister company Del Sol Travels is a full-service travel agency – we offer this service to all our clients.

Demetrio: “Monika is an architect and nature lover who had always wanted to visit this area of the world. The choice was obvious, at least that is the way I saw it. Monika had no idea where we were going to go until the day of our trip when I revealed we were going to Cancun. Her face lit up and I knew she was holding back the happy tears. Our trip was off to a good start!” 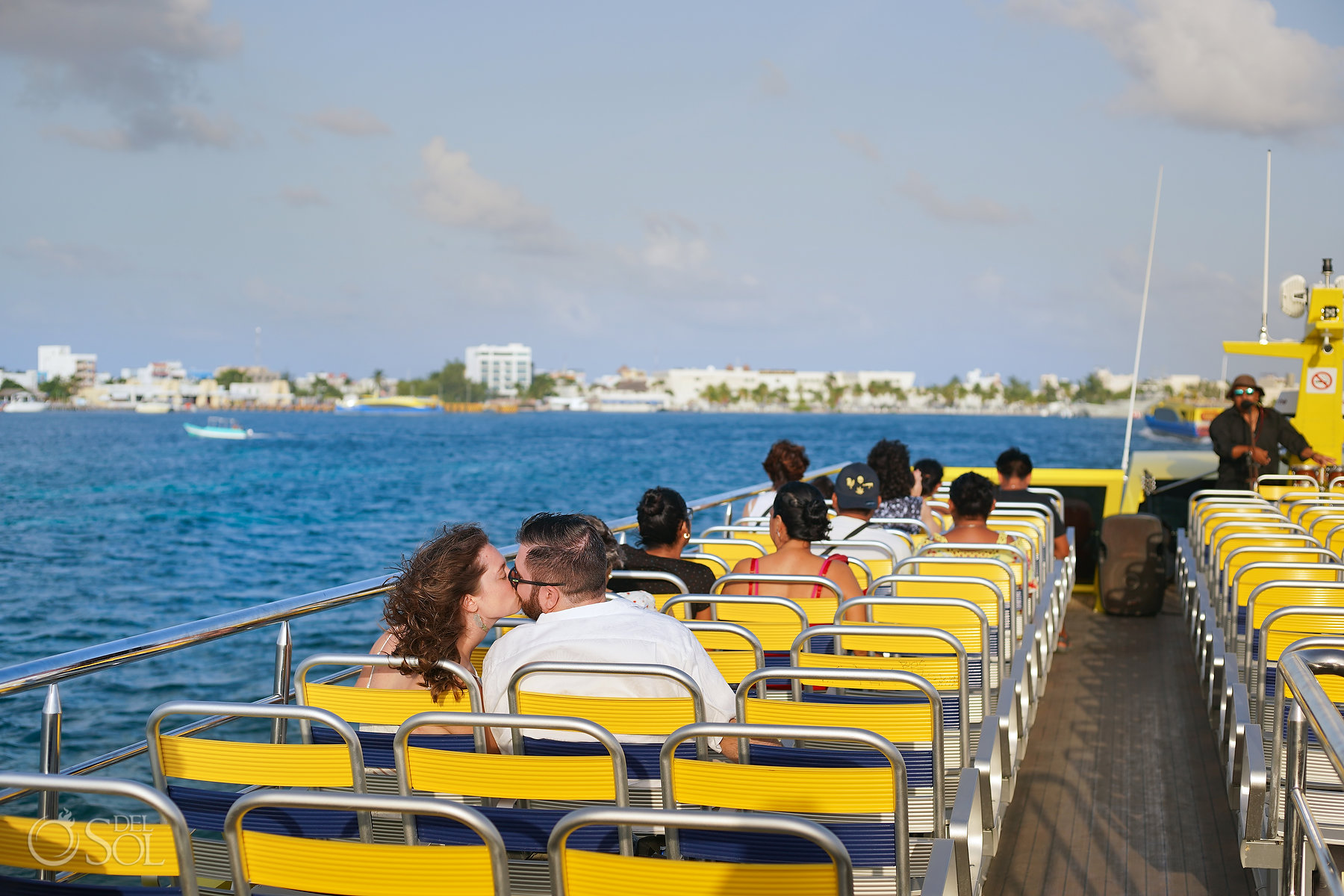 “I had no clue where we were going until we reached the airport. Before we got the tickets, Demetrio pulled out his phone and played a song as one last clue and it was from El Dorado, one of our favorite movies for the story and the music. I’ve always wanted to go and see the ruins, learn the history, and see the nature around the area so I was super excited to go. Also, I have always loved the ocean, as a child I would go to California and visit my grandma and go to the beach. I would stay in the water for hours and always feel at peace sitting and watching the waves and the sun go down.” 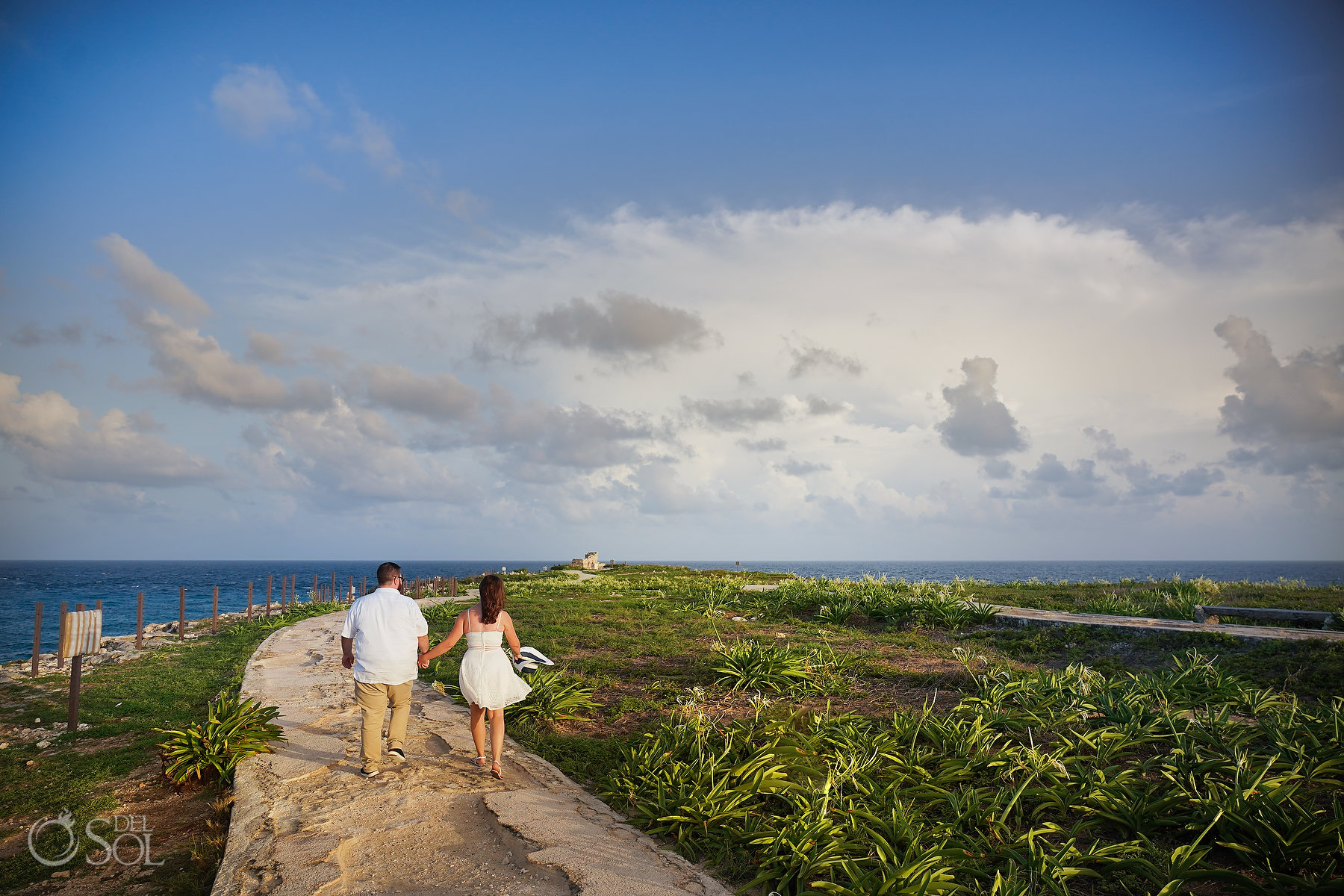 Demetrio: “In the month leading up to the trip, had been in contact with Polly and Matt from Del Sol Photography. They went above and beyond to help plan an elaborate and beautiful proposal idea and location. Everything seemed to be planned perfectly and we were going to meet with Matt at our hotel lobby in the afternoon around 3:45pm. We had plans of a sunset shoot right after the Mayan ruins proposal at El Meco. Matt arrives on time but we could tell he was worried. Once we were in the car Matt let me know that we might not make it to the ruins in time. They had changed closing time to 4:30pm and it was a 40 minute drive which would put us at 4:25pm. Monika knew nothing. The race was on!

“Our driver tried his best to get us there quickly and safely but we arrived too late and were told that the ruins were closed.” – Demetrio 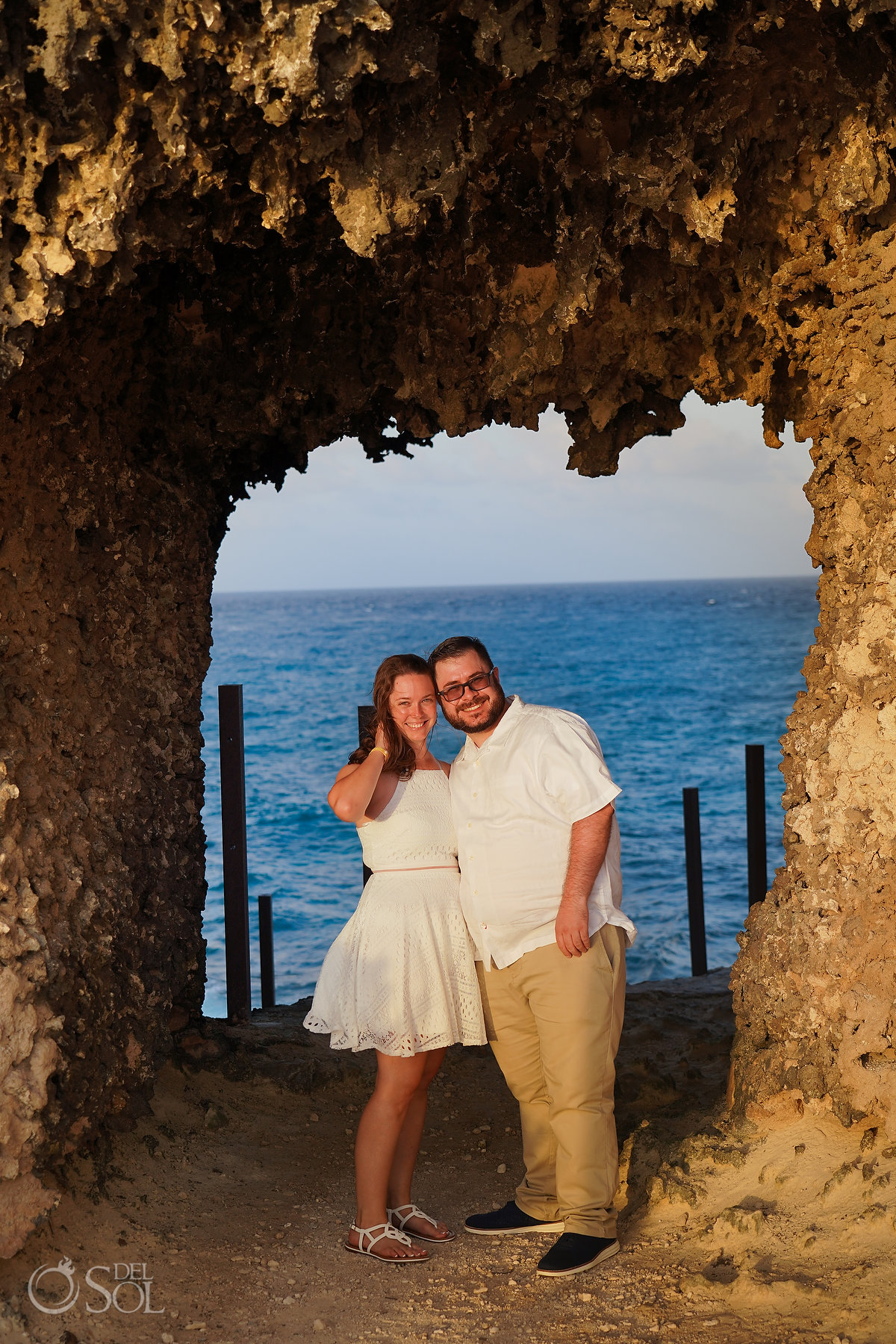 “So – quick thing about me. I’m a person who really plans and organizes, especially when it is something really important. That’s why I connected really well with Matt. I could tell he also was a meticulous planner, so I knew I would be in good hands.”

“When the Mayan ruins proposal plan seemed to be a bust, I just trusted we would find a solution and didn’t panic. Normally I would have been nervously freaking out!”

“After what seemed an eternity (only 5 minutes) Matt looked at me and told me his idea for plan X. I trusted his vision and said: let’s do it.”

The Goddess of Love

“Plan X was Punta Sur on Isla Mujeres at the temple of Ixcel, the Mayan goddess of love. One small obstacle, we had to make it to the next ferry to make it in time for sunset or we might miss our timing. We were just a few minutes too late or so we thought. We got in line and Matt showed me a picture of the spot he was thinking about on Isla Mujeres, it looked great. Monika still knows nothing. We get to the Island, rush to the taxi line, and speed off to Punta Sur.” 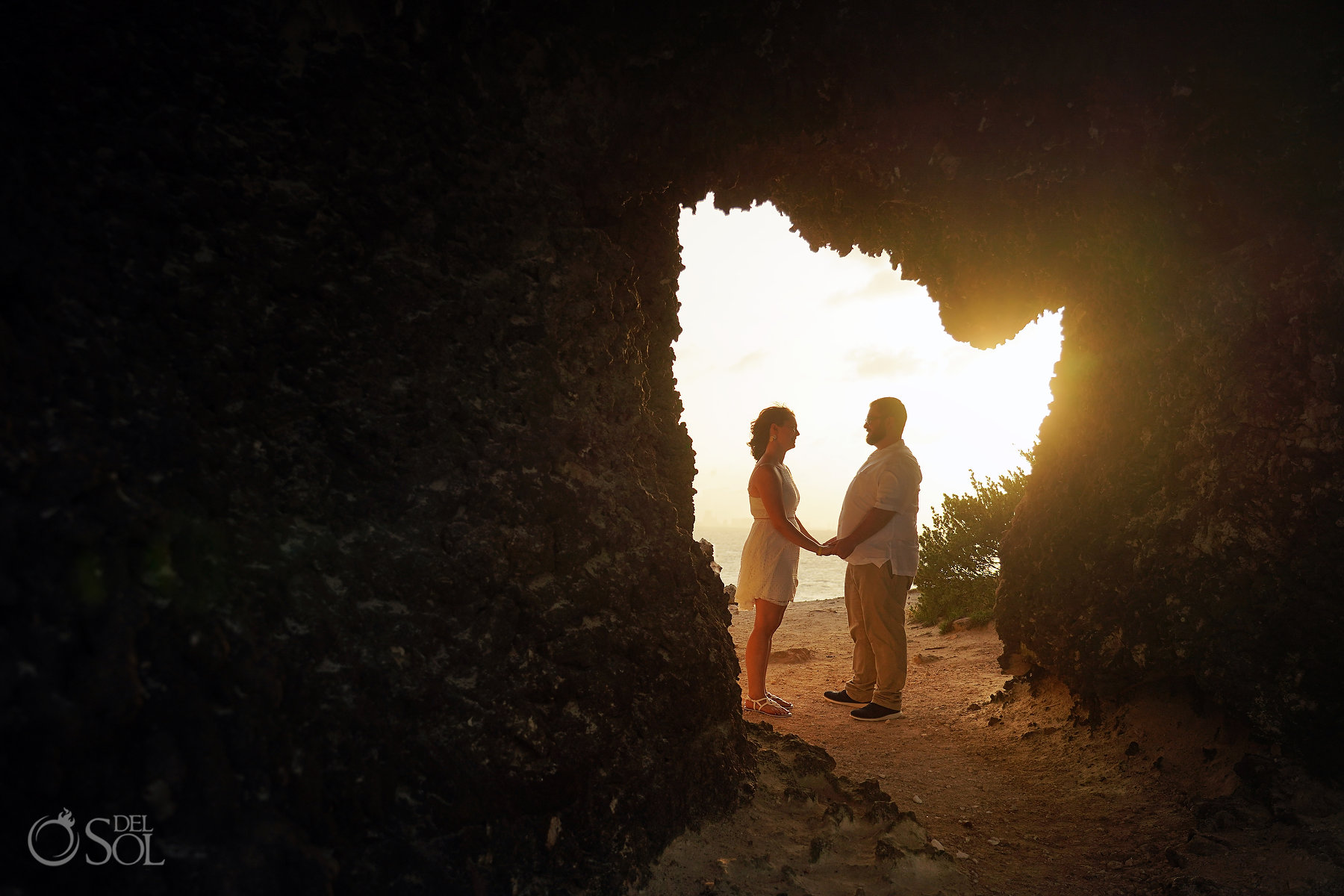 “As we walked towards the ruins I could see where the spot would be, next to the Temple overlooking the ocean. Sure enough I heard the codeword from Matt: “Chido”. I got on top of the ruins and helped Monika up. Looking into Monika’s eyes I let her know how special she is to me. I got on one knee and asked her, “Will you marry me?” Tears of joy filled her eyes and she shook her head up and down several times before finally saying “Yes.”” 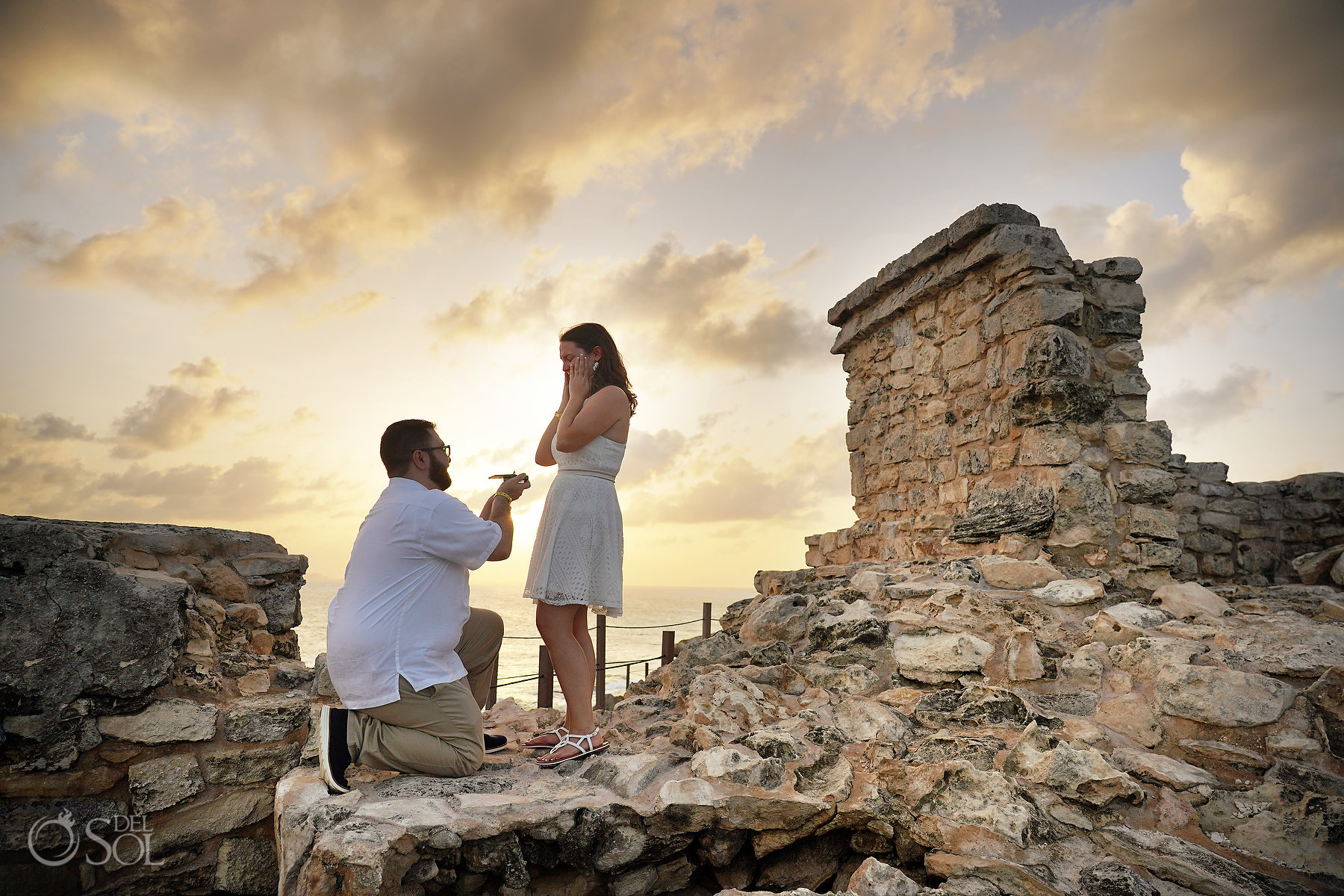 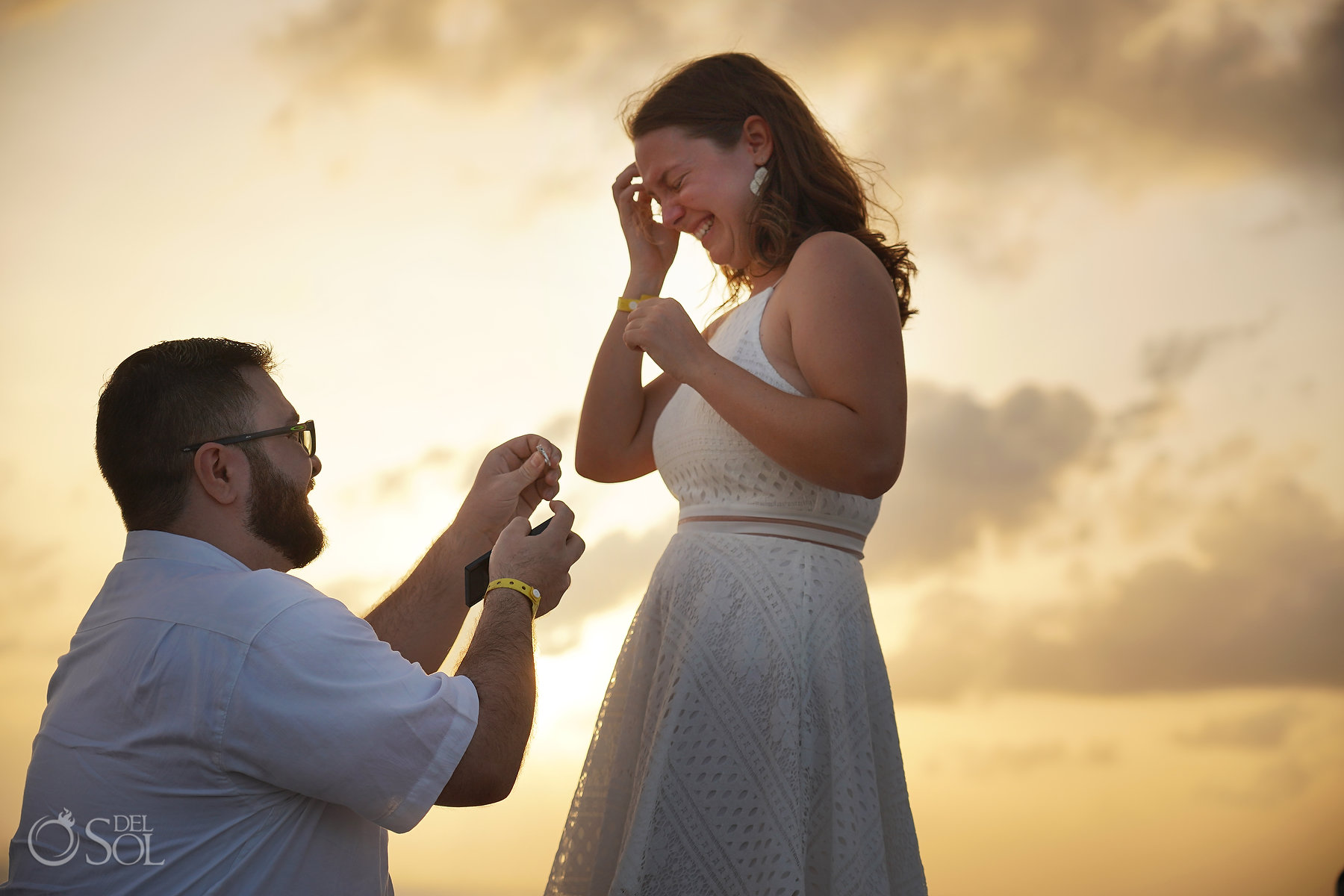 “We were over the moon happy and couldn’t believe how perfect it all felt.”

“We walked around Punta Sur a bit while Matt took some pictures of us. All of a sudden we heard the sound of a conch shell being played. We thought maybe some kids were playing around but then we heard it again and it was more profound this time.”

“Matt came up to us and said that there was a Mayan Shaman performing a religious ritual. We walked over to watch. Matt walked by the Shaman and muttered to him “They just got engaged.” 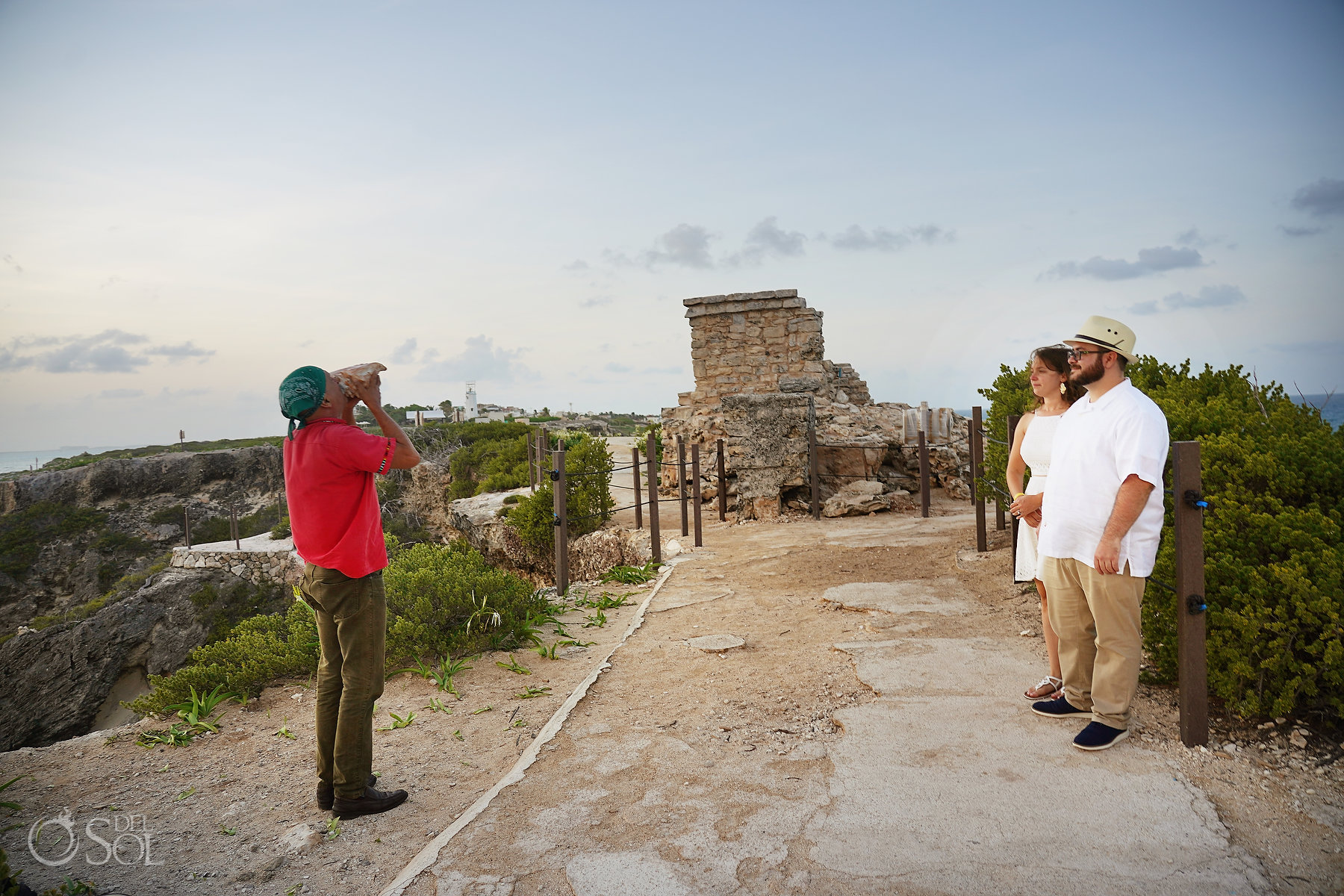 “The Shaman finished his ritual. When we went over to the Shaman we weren’t expecting to receive anything. We just wanted to sit and appreciate his culture and what ritual he was doing. When he stopped and turned to start talking to us we were not expecting it. (Monika knew some Spanish and typically understands 75% of what is being said. I ended up translating some of it after the fact.)”

“He started talking about where our relationship was going and how important it was to be there for one another. To take the moment to stand in each other’s shoes and to understand where the other one is coming from. To be the mirror to one another to help keep each other grounded. That each of us was one piece, a Yin and a Yang, and that together we make ourselves complete.” 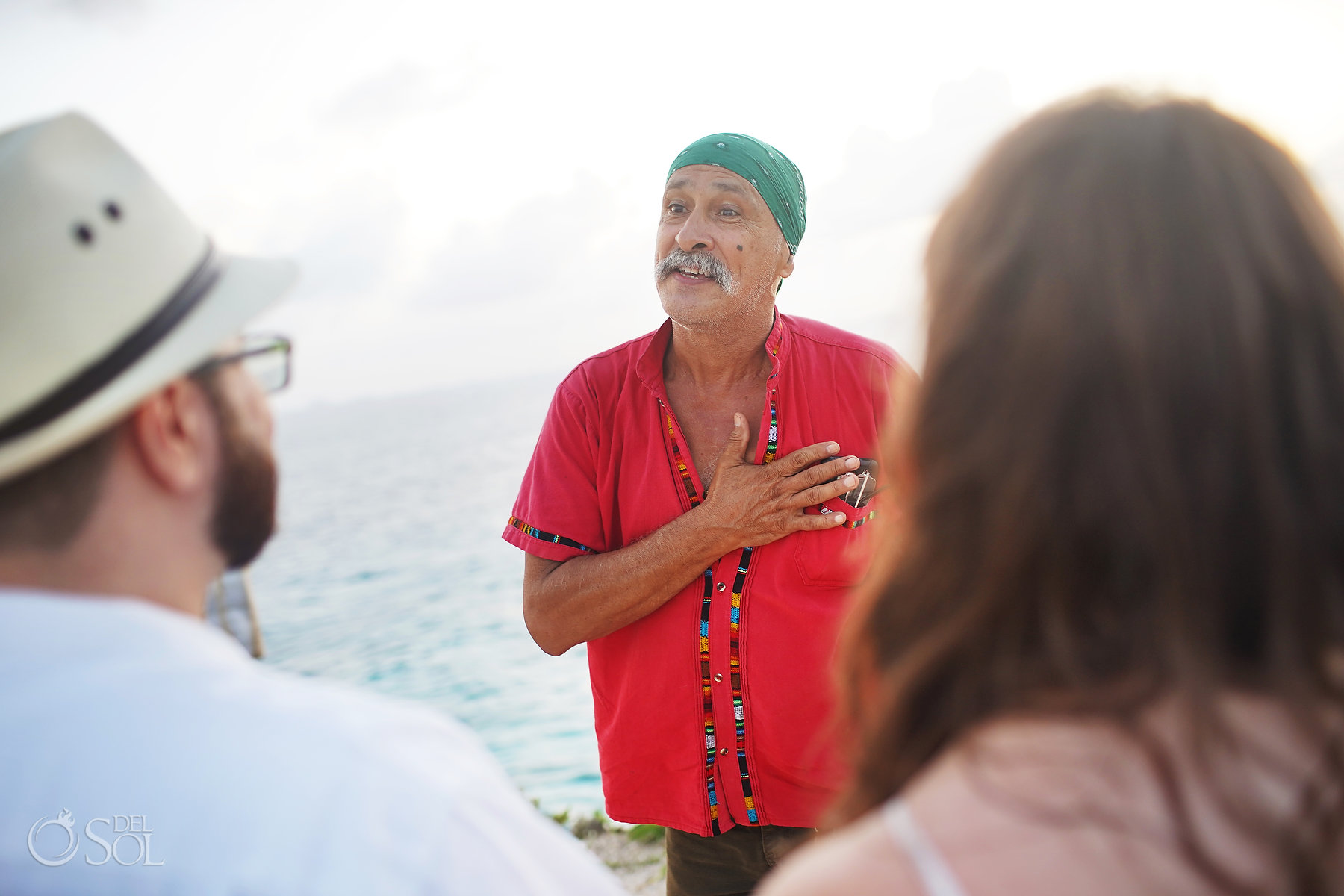 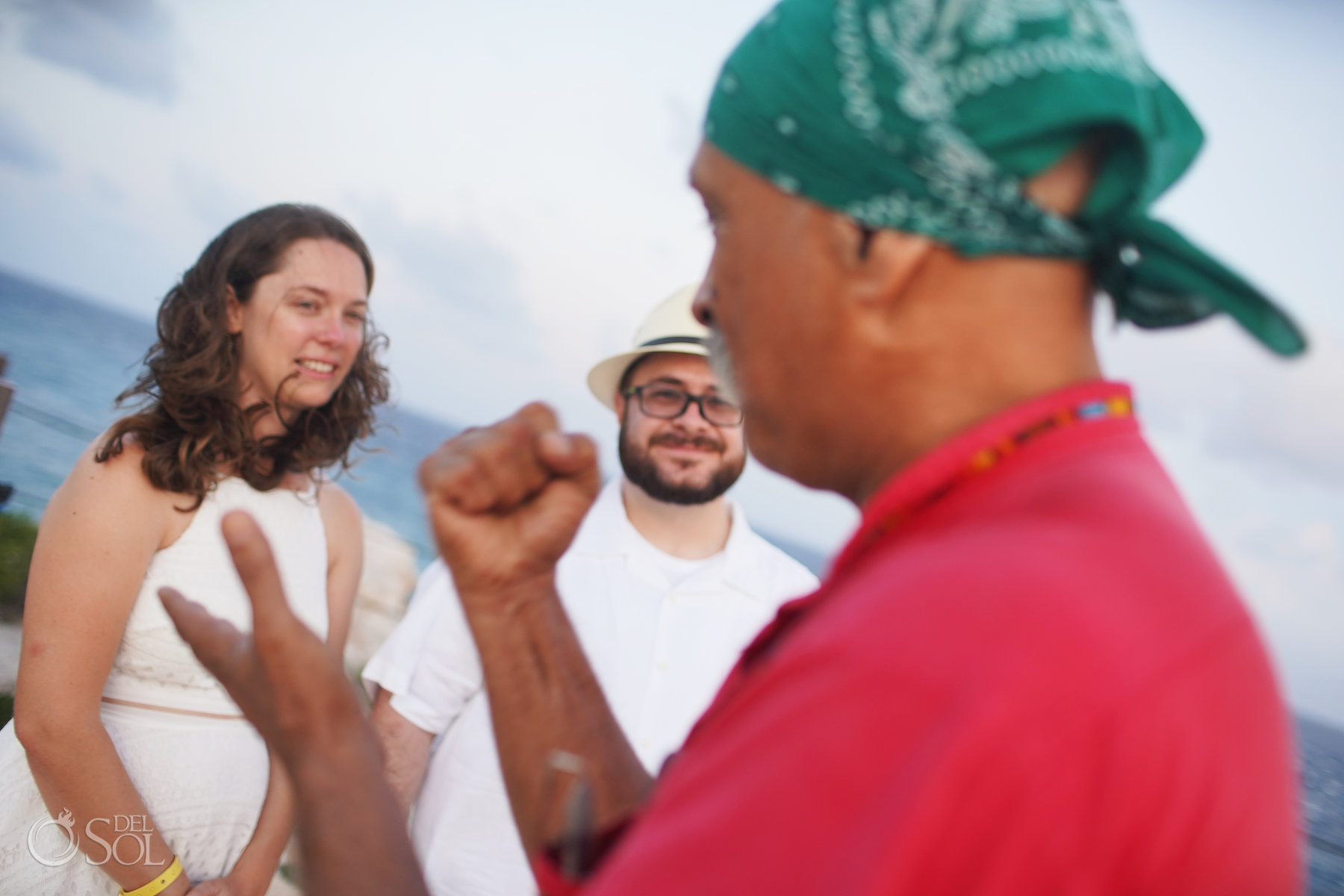 “He talked about Quetzalcoatl and how each person is a serpent roaming the earth. Every time you do a good deed you gain a feather, a piece of light. And once you gain so many feathers that you take flight into the heavens to the afterlife.”

(Crazy fact, I had been on a business trip to Mexico City months prior to this moment and my sole memento from the trip was a shirt depicting Quetzalcoatl. What are the chances that the Shaman would relay this story over six months later…. Destiny?)

“The most powerful moment was when he had us hug one another, put our hearts touching and said we were one. He was uniting us together as one, to move forward with each other in our hearts. It was the most spiritual moment we have ever had.”

“We never had much faith until this day. We believed in things like karma and something that is bigger than us but this day showed us it was real and so very powerful.” 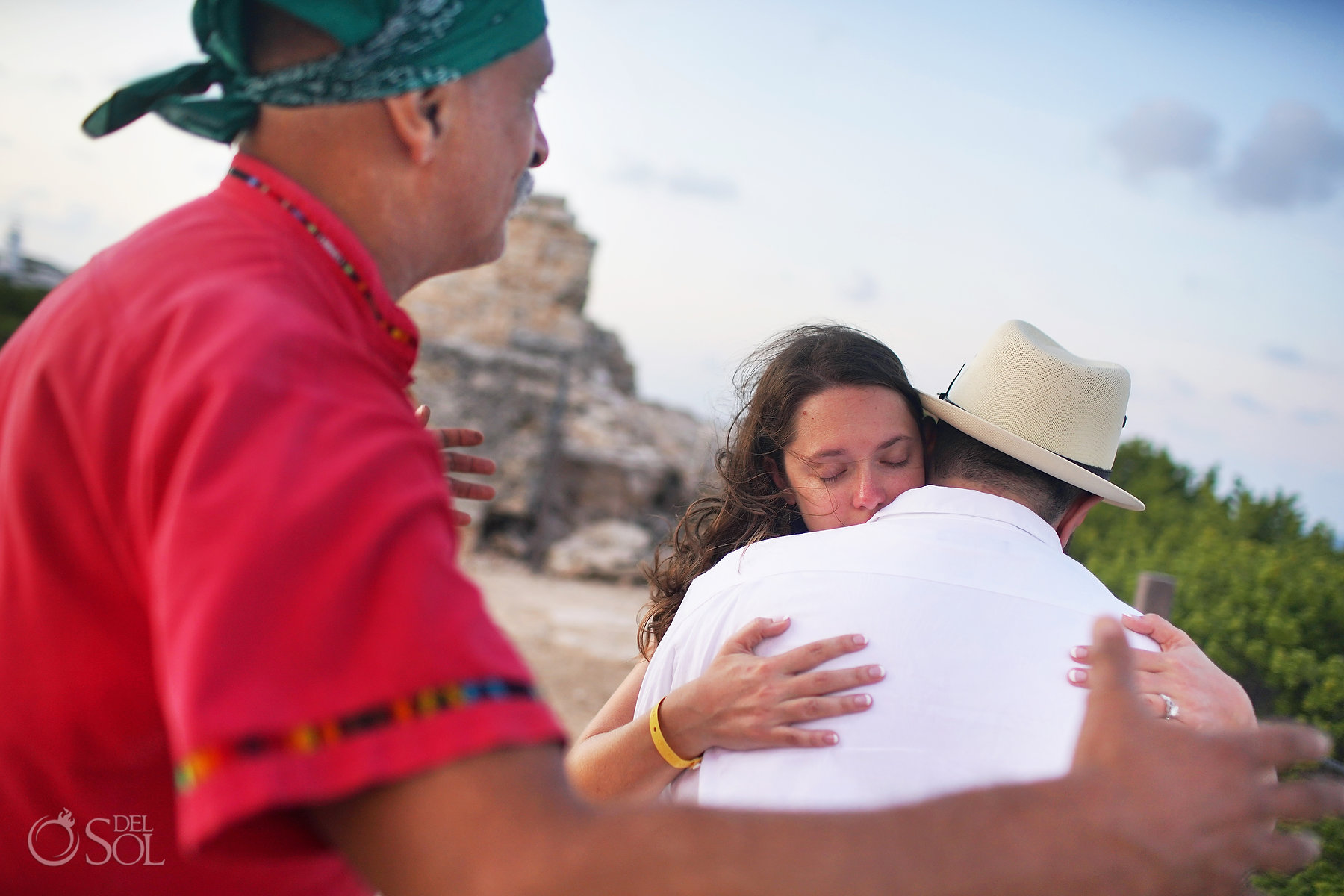 “This wasn’t plan A or B or C! As soon as this happened we both relinquished all control and were ready for anything. We all had faith and the powers that be rewarded us with such a beautiful, life lasting memory that we are so grateful for.”

“The fact that this was Matt’s idea off the top of his head, under pressure, after all the preparation for plan A and it falling through speaks volumes to his passion and dedication to create the most memorable and beautiful experience ever. He even acted as our own tour guide on the drive and the ferry ride!” “Talking afterwards Matt showed us all the things he was having his partners research on the fly, trying to figure out what might work in replace of the original plan. He was ready to follow us on our tour the next day if this didn’t work. But, like his partners said, you will do great and it will be epic, and it was! His passion for photography is unreal and his energy the entire journey was inspiring. On top of all that, he was a great guy to hang out with for the brief time that we had and it was like a friend was taking our pictures.” “The whole experience was unreal. After reflecting, the meaning behind every moment of the journey we could relate to in our journey as a couple so far. Things didn’t go as planned and we never forced a moment to come to fruition and we did just that.”

“Road blocks came up, just like the timing of the ferry not quite working out, but we worked through it and we enjoyed the journey through it. We were at the point of Isla Mujeres, Punta Sur, where waves are crashing on the sides, like daily life tasks keeping you occupied. But at the end of the day, through it all, we have each other and we can make it through anything as long as we have patience and faith.”

Thank you Matt for taking us on this unbelievable journey. Here’s to more to come! :) Be sure to check out out Amazing proposal ideas in Mexico.