John and I have been together since 2008. Our two youngest children were only 8 & 9 when we got together. For the most part, they got along well in small doses. As they’ve gotten older, they have developed a very nice friendship and brother/sister relationship. They genuinely enjoy spending time together. Chelsea’s father has never been a part of her life and she looks to John for that relationship. Both of my children adore him and I feel the same way about Julia.

I’m very lucky that I found a man who treats my children like they are his own.

Chelsea stood up for me as my maid of honor. Chase escorted me down the aisle to give me away and then joined the other groomsmen. Julia acted as my bridesmaid and honored her dad and I by singing the song “My Valentine” at the ceremony. John’s brother Steve was his best man, and John asked Chelsea’s boyfriend (and future husband) to stand up for him as well.

Chelsea played such an integral role in our wedding. I honestly could not have done it without her*. The picture frames on the chairs was another of her surprises, one that brought me to tears. One was of my maternal grandparents, who my mom, sisters and I lived with for most of our lives. When Chelsea was born, we had four generations of females living under one roof.

The other photo was of my mother who passed away in 2009. My mom was my best friend and I miss her every single day. The only thing that could have made our wedding better would have been her being there. She would’ve loved it so much. She was a real beach lover and so enjoyed spending time with family. For her, to have been able to celebrate with me, John, our kids, and my sisters, would have made her the happiest woman in the world. In addition to her photo, I was wearing a pendant in which some of her ashes had been placed, so she was there in another way.

As far as the rain went, it definitely changed the affair I had been visualizing for so many months. Had we known earlier that it was going to happen, all of the decor we’d ordered would have been set up in the ballroom instead of outside. We were very happy that we made it through the ceremony before those threatening clouds actually arrived and burst overhead.

Once the decision had been made that we needed to relocate, Zaray (our wedding coordinator) was amazing. She and her staff sent us down to the bar for about a half hour while they moved everything into a ballroom. The party then picked up as if it hadn’t been interrupted. We re-did our first dance, toasts were made (which were very funny), dinner was served, the cake was cut, and the dancing started. Everyone had such a great time.

Everyone has been telling me since that rain on a wedding day is good luck. Maybe, but I choose to look at it another way. There’s a great country song called “Holes in the Floor of Heaven” that talks about rain being the tears of loved ones who are watching and wishing they could be there. I like to think my mother and grandparents were with us that day and that the rain was proof of that.

We chose to have a destination wedding for a few reasons. One, it wasn’t our first rodeo, two, we didn’t want something too big in NY which would’ve been prohibitively expensive, and three, because we love the beach and traveling to tropical locations.

Cancun has become our home away from home. We started vacationing there in 2009 and Beach Palace was the first resort that we stayed at. Obviously, it had to be the one where our wedding would be held.

We wanted to share the place we loved with our family and friends (only John’s mother, one of his nephews, and my brother-in-law were unable to join us). We loved the rooftop venue for the ceremony and reception, and never considered a different resort.

Anytime we’ve been there, the staff has been so accommodating and amazing. From Wilma, the general manager, to Zaray, to Juan Jose, the restaurant manager who always suggested the best wines, to Antonio, the beach concierge who went out of his way to make the arrangements for the pool party, and Fernando, the rooftop bartender who made cocktail after cocktail to help us figure out our signature drink – I cannot say enough good things.

Working with Valeria and the rest of her staff was wonderful. We are dying to see all of the pictures. The few we’ve seen are so amazing. She and her staff were creative in their vision. Even though they were everywhere, they were not in any way intrusive. It was a true pleasure and I will certainly recommend del Sol to anyone I know who mentions needing a photographer in Mexico.

Our families are already saying we all need to go back next summer to celebrate our first anniversary together. I’d say that qualifies as a success!!

Elizabeth made a special thanks to Chelsea:
*She helped me find my dress, as well as the ones she and Julia wore, and also Chase’s suit, designed the “Welcome Bags” and everything that went into them, located all the objects (tumblers, pashminas, sunglasses, sunglass pouches, cosmetic cases, card cases, first aid and recovery kits) and designed tags for everything. She also put together our Welcome Letter and Itinerary. Unbeknownst to me, she planned a cocktail party to be held in her suite before our rehearsal dinner. She brought props for photos, decor, games, and coordinated with the resort to bring up various food items as well as champagne.

Chelsea also brought down from NY gorgeous decorations for our rehearsal dinner. She planned a pool party for our guests with fun activities that was originally scheduled for the day of the rehearsal dinner but was postponed to the day after the wedding due to the storm. Everyone had a ball.

You can see Elizabeth and John’s wedding highlights video here

Hair and Makeup: Tania Tagle and Nohemi Silva – “They were so much fun to work with. John was worried he wouldn’t recognize me walking down the aisle, but he needn’t have worried. Tania made me look beautiful, but I still looked like me.”

Wedding Cake: “Our cake was designed by the Beach Palace bakers who were able to replicate the ombre effect I was hoping for. We added the edible butterflies I brought from home.”

John’s suit: “custom made by Ian Rios in NYC. My favorite part was that our wedding date was embroidered inside.” 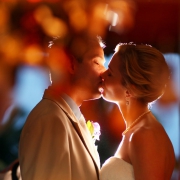 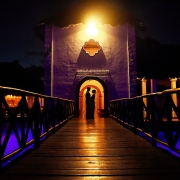 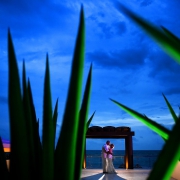 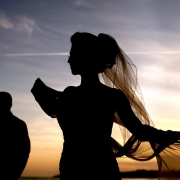 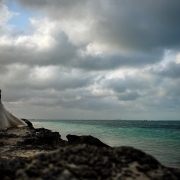 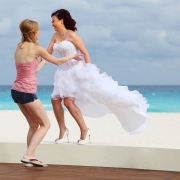