“Of course every little girl dreams of being a princess — but my favorite was always Ariel. She could swim with all the fish and make music underwater with all of her friends… Of course she ends up marrying her Prince – Eric! How perfect is that!?!? ;)” – Cammy, Mermaid Proposal.

What makes a great wedding proposal? For sure it has to be an amazing experience. A proposal is a landmark in your life and you’ll want to remember that feeling forever!

Since you’re going to photograph the proposal – well – a visually stunning location to pop the question is a must. Lots of places feel great but don’t look so spectacular in photos… And then there is the element of surprise to play with…

You’re going to invest in a proposal, hire a photographer, find a beautiful location and prepare everything – why not go crazy – go one step further? Just when your brand new fiancé imagines they can be any more surprised why not throw ’em a curve ball and knock their socks off!

“The whole ‘mermaid proposal’ idea began by finding out that Del Sol was Cammy’s favorite photography company. We decided to take a trip to the Riviera Maya, I was following you guys on Instagram and I realized that you work there. The next day I called Polly and knew I was sold on Del Sol, I was going to plan the best wedding proposal” – Eric

When I first spoke to Eric I knew the location I wanted to photograph his proposal in straight away. The cenote with the rays of light entering is the definition of an epic proposal location! He kept insisting that he wanted to do something really crazy… We spoke by phone and email several times and he mentioned that Cammy loved mermaids – PERFECT.

If a mermaid is Cammy’s “spirit animal” – her avatar – she should be proposed to as a mermaid of course!

“A proposal is a fairytale moment… let’s play with that idea!” – Polly

Eric surprised Cammy with a holiday portrait session. The second part of the surprise was that the portrait session was with Cammy’s favorite photographer: Del Sol! We walked into the jungle taking pictures and entered the amazing cave which we had already prepared with copal to paint the rays of light and 2 more team members hiding in the shadows….

The cave is so quiet and calm and has a really special atmosphere. They smell of the copal and the rays of light add to the effect, you feel you’re in a sacred space. I asked Eric and Cammy to stand in the rays of light and there was a pause… It genuinely was one of those moments where time stands still – where the air hangs heavy with anticipation.

“It was so magical and spiritual. The rays of the sun truly looked to open up the heavens.” – Eric

The dust settles after the excitement of the proposal in the cave and we walk back out of the cenote.  Then we tell Cammy it’s not over yet! We wanted to do MORE than an amazing proposal in an epic location – we wanted Eric to propose to her again – underwater with her dressed as a mermaid!

“I was soooo surprised!! I’d hoped Eric would propose in Mexico but never did I think he would go to such great lengths to make it so magical for me. I was just literally in awe.” – Cammy

“You can see it all over my face. (Also the paleness) haha—we were in Mexico after all and the tequila-be-flowin!! ;)”

“Our experience with Polly the del Sol team was amazing!! They did an incredible job of doing literally whatever it took to get the perfect shot! Some of them even hid in the dry cave while he proposed and popped out right at the exact moment he got down on one knee! I love their free spirit and how they encourage you to literally dive right in!” – Cammy

The final touch was the ring-pop that Eric brought with him for the mermaid proposal. We needed a big Disney princess style ring prop that would show up well in the underwater proposal photos.

From the beginning, I had the idea that I would work on the ring in photoshop so it wasn’t really a big deal when Eric pulled out a slightly melted ring-pop (that continued to shrink throughout the underwater session!)  When I started editing the images I bling-ed the ring-pop up and I got to thinking… I have seen so many pictures of girls in mermaid tails and that’s super fun – but we want to be unique! We’re playing in fantasy land so why not embrace the power of photoshop and go “full mermaid”!

I made the mermaid tail specially for Cammy and the fabric was this amazing scaly sequin… I started softening the line between the tail and her skin and just went with it – then her bikini was in the way so bye bye bikini and hello mermaid scales – I really love the final effect!

Editing the underwater pictures so Cammy looks like a “real” mermaid is my final surprise for her and Eric. It wasn’t in the original plan at all!

Del Sol is known as a photojournalistic style studio who stays as close to the reality of the day as possible – but that dosen’t mean we don’t like to play too! We create epic, unique and innovative experiences – we embrace everything to it’s ultimate and most extreme version and we also have a sense of humor ;) So long live mermaid Cammy and Price Eric!

“My top destination PROPOSAL advice is call the Del Sol team! They’re so fun and have the best ideas! Don’t be afraid to do something different. It doesn’t have to be a mermaid proposal per-say, (haha), but make sure its something that she knows you worked hard to make special for her. The proposal itself far exceeded my expectations and imagination. Your team did such an amazing job!” – Eric

Be sure to see Cammy + Eric’ wedding here

This post is featured as one of  5 Riviera Maya engagement and marriage proposal ideas *the best wedding proposal ever!

Mermaids actually stem from a childhood fantasy that we all have… Every little girl wants to be one… Just ask Del Sol Photography’s co Founder (Matt Adcock’s) niece, Peyton West.  At age 8 when asked if she would like to be a mermaid, she stated “Who doesn’t want to be a mermaid, DUH”.

We have incorporated many Mermaid themed shoots for other clients.  Seems as though whenever we do, the world really wants a piece of it.   Susana’s wedding was featured virally in dozens of countries and has several hundred thousand hits on the video uploaded to youtube.   She was BOLD enough to get married in the middle of the ocean in Cozumel Mexico along with her hundreds of guests, they stood on a sandbar and she walked the aisle in epic fashion.   Here is her Mermaid Themed Wedding. 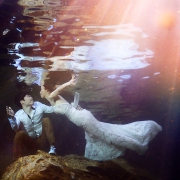 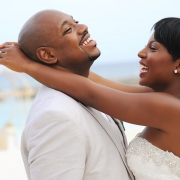 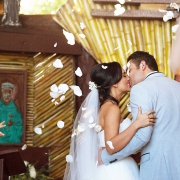 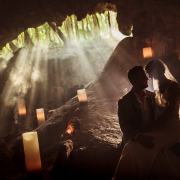 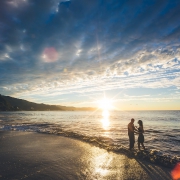